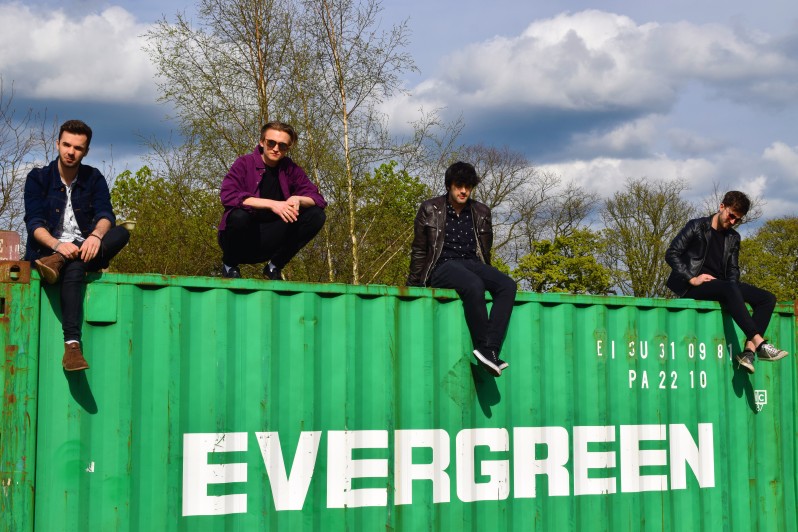 Alright guys, thanks for taking the time out to complete this interview. I understand what a busy bunch of lads you have been lately, so it’s a much appreciated you doing this!
First off lets start with your brand new track ‘Hear You Call’, you wasted no time really to get this track released so early in the year. Was that always the plan for this track? I’ll be honest, it’s great to hear bands start the year off early.
We really wanted to hit the ground running this year. We’ve had Hear You Call recorded for what seems like forever and definitely wanted to get it out earlier, but now just feels like the right time now to start the year off with new music and now we have the music video polished off.
The song has a really large anthemic sound to it, which is what I also get from your earlier releases in 2017 with ‘Everything’ and ‘Firelight’. Where do you draw your influences from as a band, also which albums really inspired your sound?
I think we all draw from different individual influences which is what creates our sound. One of our main drives is creating songs with an immersive atmosphere.
Bands like Grouplove, Catfish & the Bottlemen, Young the Giant and Amber Run contribute to our influences, among many others. Grouplove’s Big Mess is a great album, inspiring some of our riffs and hooks. YTG’s Mind Over Matter probably influenced our song textures, inspired us to be more creative with instrumentation, effects & harmonies.
How do you find it going in to the studio to record? Because it can be quite a tiring process when you can’t seem to get the sound you want. Also where do you record your tracks, is it several studios or do you have one go to studio?
It can be a draining process getting everything tracked in one day definitely, but we love it. The studio is our favourite place to be. The excitement when we see a track coming together compares to nothing else, we’re all like kids at Christmas. Sometimes we can go in with one idea for a track and it come out completely different for the better. We always record with Sugar House studios, the guys there are magicians of production and we really value their input as we work through the recording process.

Also I found out you guys will be playing Live at Leeds this year which must be a big thing for you lads as it’s giving you the chance to play alongside bands like Peace and Circa Waves! How did this come about? And who are you looking forward to play alongside?
Yeah, we’re pretty buzzing about that one to be honest! We’ve played smaller festivals before but this is our first bigger festival with a lineup that’s absolutely insane too.
As well as the headliners, we’re looking forward to seeing Blaenavon, High Tyde, Sunset Sons, BLOXX, Cassia, Ten Tonnes & our pal Martha Phillips from The Elephant Trees. We recently played with Sea Girls too who are also on the lineup, class band.
Yorkshire is a great place for music, my favourite band of all time The Cribs are from round that area as well as some others. Do you have any particular favourite bands to come out of Yorkshire?
Yorkshire is wonderful. There’s the obvious choice of Arctic Monkeys but they just can’t be denied, can they? One of our favourite upcoming bands Marsicans are from Leeds I think.
Yorkshire is also home to so many great venues, one of course being the Brudenell, which other venues really stick out for you guys up there, any that you particularly love playing?
Yeah Yorkshire definitely has some lovely venues scattered about. The Picturedrome in Holmfirth is probably the biggest we’ve played and it’s amazing. We also love The Wardrobe in Leeds, West Street Live in Sheffield and The Parish in our hometown of sunny Huddersfield.
I also know that the Yorkshire music scene is doing well at the moment, which acts do you think will be looking to perhaps break out this year, and who would you suggest to keep our eye on?
Well, Marsicans for one, recently playing Maida Vale and releasing tune after tune. Huddersfield pals Mahatma Raindrop and Leeds band Peace Frog are definitely worth a look at.
With 2018 in full swing, and being in a band it doesn’t offer a lot of opportunities to stop and look back as you’ve got to be constantly moving forward. What are you looking to accomplish this year, and what would make it a successful one?
This year we want to focus on reaching new people and new places so we can carry on getting our music out there. We’ll hopefully have the chance to tour up and down the country a lot more. We’ve got another track recorded ready to be released later in the year to finalise into our debut EP, and were working on new songs that we’re really excited about and can’t wait to start implementing into our live set.
Thanks for taking part in the interview guys, I know 2018 will be another good year for you lads! Hopefully will get to see you live at some point!
Thanks very much man, see you soon!

One thought on “Interview W/ Courtyards”