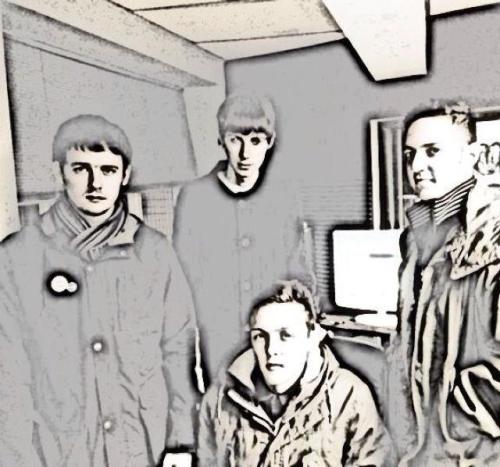 This band is a four piece coming from Chingford, London and although they’ve only been gigging for short amount of time they’ve built up quite a fan base around there, having sold out venues such as The Camden Rock and
The Rhythm Factory , and it looks like it may branch out it even further. The band consists of lead singer and guitarist Niall Rowan, lead guitarist Daniel Connolly, drummer and brother Ryan Connolly and Bassist Michael Hanrahan. Taking their influences from the likes of The Kinks, The Who, The Rolling Stones and loads more they have quite a good sound behind them. They’ve also gained interest from Tom Clarke, Bonehead and Peter Mcleod, as well as this they are wanted around the UK, South America and South Korea. As if that wasn’t enough they’ve aslo gained airplay from TCRFM Tamworth, Croydon Radio, The Hey Mr DJ online radio show, John Forster’s daily rock podcast  and The Unsigned Music Show, not badhttps://wordsformusic.wordpress.com/wp-admin/post.php?post=823&action=edit for a band who’s just started.

The EP contains three songs which are ‘You Shine’, ‘Echoes’ and ‘War on the floor’.

If you read this blog regularly, you know I’m a fan of loud drums, and I like the drums to play an integral part of the song by being loud and prominent, so when I first listened to this song, after the first few seconds I knew there was going to be a strong chance I’d like it, and I was right.  I can definitely hear hints of Oasis in there, slightly in the sound of the guitar and an essence in the vocals. I think what I like most about this song is the edginess of it and the rawness, it doesn’t seem like it’s been coated with loads of effects which is nice to hear.

After listening to the first track, I had high hopes for the second on and it didn’t disappoint, as it stayed consistent by keeping that rawness which they get from having highly distorted  guitar and those loud drums being caned in the background. Like the first track this has a bit of a punky edge to it, which they get from the rawness of the recording of it, again it hasn’t had loads of effects thrown on top of it. For any other song I think I would pick out the fact that you can’t hear the vocals enough, but I think it really suits this sound, like The Strokes first album, Julian’s voice really suited the music they were playing.

‘War on the floor’ is probably my favorite of the EP, mainly because of the riff, it’s the catchiest one on there. Also I think the set of lyrics they have on this track are their strongest lyrics, and I also think that this is Niall’s best vocal performance on the EP. Also I think this one would be definite crowd pleaser live, all the songs would so big live but I just think that this on would sound the biggest, especially with the chorus.

It’s a band that I need to see live now, another one added to the list. They have quite a lot on their soundcloud, so it’s something that you should be listening to if you haven’t. After some good signs in their first EP, I’m really looking forward to their second EP, and what they will do next, so I’ll be keeping one eye open for them in the coming months.